I’ve been too busy to finish so…

I’ve been too busy to finish this because I have been helping somebody with some complex eventing, but it has been good for me because I learned how to use some more scripts in fun and interesting ways.  But here’s the library tileset I’ve been trying to finish. 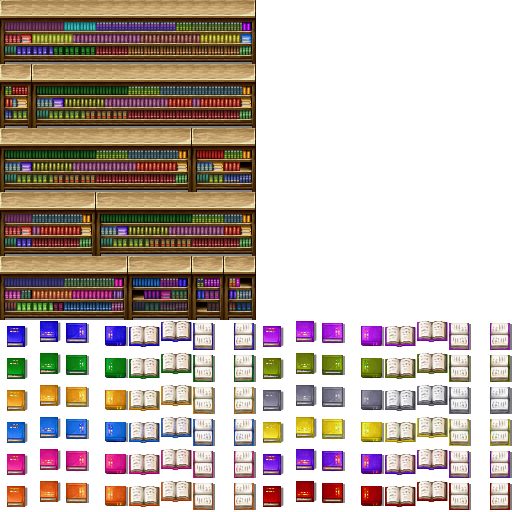 If you’ll notice a lot of the bookshelves have really similar patterns and I wanted to vary that up a bit, but that takes a while also I think a couple are the RTP bookshelves and I intend to change that, plus I wanted to have an alternate color for the bookshelves that would go next to the others.

The books on the bottom should all be good.  One of the problems with recoloring the books using GIMP is that the open pages get all screwed up.

So I had to create this template to overlay on the open pages you can use this if you want to make your own colors and want to fix the pages with less hassle.

Also a look at cool stuff for RPG Maker VX ACE from other great blogs:

Kread-Ex made a script from an idea I posted (Thank you), it is called Skill Decay.  Remember in Tony Hawk’s Pro Skater how you would get less points for using the same trick over and over again, well this is the RPG equivalent for skills.  Force your players to use all of their fire skills on the weak against fire enemy instead of just one.  If applied the right way this can add depth to a game.  If can also be abused by people who are just lazy about design and don’t want people to skill spam (note: don’t be a lazy game designer or I’ll cut you).

Archeia Nessiah made some more wonderful portraits that match the RTP.  This time it is More Terrence Stuff!  If you have never been to Division Heaven, spend some time browsing the blog because you are almost guaranteed to find something useful to you here.

Yanfly once again has new script.  This time the posted script is Ace Status Menu.  Check it out, it has a lot of customization options which makes me happy.  The total number of scripts available has now exceeded 100 and most are very useful.  I’ll probably end up using a ton of them.

Yami released his/ her Charge Turn Battle is out.  I’ve been waiting for this one.  If you can test it out and report the bugs so this can be ready for the full version of Ace.

And last, but certainly not least, is Victor Sant who has just released his beta test for Animated Battle.  This is one of those scripts that I should avoid because I will end up spending months tweaking everything to make a really cool looking and then lose all my interest with my project.  All his scripts are pretty darn nifty too, check them out.

Catch you guys next time.

One response to “I’ve been too busy to finish so…”